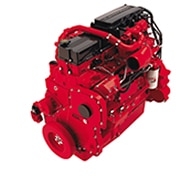 Power to Get the Job Done!  Cummins ReCon offers factory remanufactured Short Blocks, Long Blocks and engines for Cummins MidRange B, C and L engine platforms. Each unit is completely disassembled, thoroughly cleaned and carefully inspected before being remanufactured to the latest technology, and tested to the exact same performance specifications as new

In fact, more customers are switching from major overhauls to Cummins ReCon options than ever before and with good reason.

First, they look at the real cost of a major overhaul, including downtime, machine shop delays, unforeseen repair charges and warranty exposure. Then, they look at the Cummins ReCon exchange engine option. With ReCon, you get much more than an overhaul. Every part is completely disassembled down to the last nut and bolt. Then each individual piece is thoroughly cleaned and inspected. Parts that cannot be restored to Cummins' exacting specifications are replaced using only genuine Cummins parts. Critical wear parts such as pistons, rings, bearings, bushings, seals and gaskets are replaced with genuine Cummins new parts every time.

Specify Cummins ReCon Engines when your customers' engines are ready for their next major overhaul.

On the job and at the fuel pump, Cummins ReCon MidRange engines pay off big!